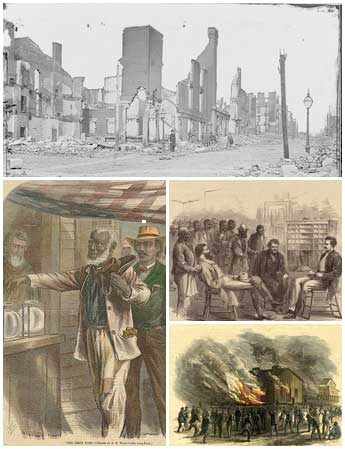 During the Reconstruction era from 1865-1877, following the Civil War, Confederate States were required to take an oath of loyalty to the Nation and to abolish slavery, in order to be admitted back into the Union.  Northern “carpetbaggers” and federal troops occupied the South to protect the Civil Rights of African Americans. The Freedmen’s Bureau, established in 1865 and abolished in 1872, provided assistance to emancipated slaves, while Southern states passed “black codes” to restrict the rights of emancipated former slaves. Reconstruction saw the rise of Black participation in politics, including the House of Representatives, and the US Senate, as well as the rise of the Ku Klux Klan and other organizations and tactics to intimidate, threaten, and harm, African Americans.