Civil War of the United States of America 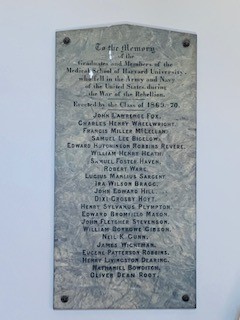 The American Civil War, also referred to as the War of the Rebellion, was fought from 1861 to 1865 between the North (the Union) and the South (the Confederacy). The war was fought over the enslavement of Black people in America. A monument to Harvard Medical School's Union Soldiers and Sailors who gave their lives for freedom, hangs in Harvard Medical School's Gordon Hall and reads:

"To the Memory of the Graduates and Members of the Medical School of Harvard University who fell in the Army and Navy of the United States during the War of the Rebellion.